A Miracle in the Midst of Mayhem... 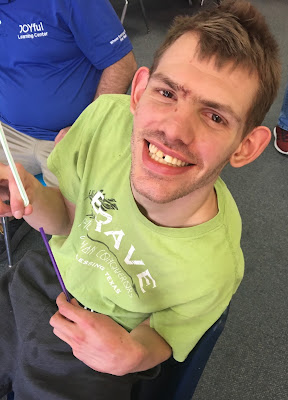 I thought about titling this "Sunshine under our Umbrella" - as that seems appropriate too...

But in light of Easter that is fast approaching - I thought I would go for something a bit more spiritual.

This picture taken by Brandon's caretaker at his Day Program pretty much sums up this "Autism Awareness Month" of April.

I'm mesmerized by the picture really.

His eyes - bleary & bloodshot - say everything there is to say about the bravery of his struggles of late.

The fresh wound - not from a seizure fall - but from a fall from being so wobbly and weak from having the flu and bronchitis back-to-back.

I'm not sure why so many injuries must happen to his precious face.  Why so many times he has broken off a front tooth.

I guess it's satan's way of mocking us.  He can't pierce our spirit, or Brandon's, so instead he goes for the smile, the scars.

Our PTSD scar has been ripped open of late.

Our second major PANS attack sucker-punched us all in the gut - ripping open the scar from the first PANS attack and leaving us once again to bleed profusely.

We felt like cornered animals - scared and lashing out at the injustice our "Life with Autism, Seizures, & a side of PANDAS" gives to us.

Our emotions were raw and real in an indescribable kind of way.

It's hard to put into words the emotional rock bottom feelings we've had.

The thoughts that crept into our minds in the depth and darkness of our PANDAS-pit.

And Brandon being non-verbal - I suppose the gnashing of the skin on his hands barely scratched the surface of what hell his brain-on-fire was going through.

Much like Jesus did at the injustice happening in the temple - I wept.

To watch what vaccine injury does over and over to our innocent son is an unbearable pain.

Most definitely worse than measles.

I can't help but put each of our suffering in the perspective of Jesus' journey to the cross.

Perhaps that's why this picture mesmerizes me in such a spiritual way.

Those Beaten, Bloody, Bloodshot eyes not by a person - but by vaccine injury.

I feel Mary's helplessness in my soul.

Eyes that still manage to sparkle through such suffering colliding with a smile that silently speaks of such supernatural survival.

I look at that picture and feel such shame.

Such shameful thoughts I have had in the bone-tired traumatic delirium of being scared to death of having to go through what we had yet again gone through - for the rest of our lives...

It's just too much to endure for as long as we must.

Every grumble uttered by him making me want to run and hide in a fetal position lest it's another attack.

It's unfathomable what this severity of vaccine injury puts you through.

We warriors are tough.

We have no choice.

But even the toughest among us sometimes take a knee.

If only for a moment.

Each thing we go through leaves a scar.  We become more resilient.  But then each time the wound is reopened as in another PANDAS attack - that scab is ripped off and the blood gushes again - and we are left to pick up the pieces of our PTSD in utter numbness until it scabs over again.

That's the best way I can describe my now.

Heartbroken for my son.

Some people drunk-dial an ex-boyfriend.

Last week, very much sober, I called group homes to see if someone could take my son if just for a weekend.

We needed time to heal.

Time away to once again think of  our son as the brave warrior is he in that picture.

And not the rabid-dog-behavior that the PANDAS-attack turns him into.

Such a horrible way to describe it.

When in that state, Brandon is not Brandon.

And it is horrific to witness such pain and agony he must be feeling in the autoimmune malfunction brought on by something as tiny as a piece of pollen, bacteria, virus....

But alas - there was no where to turn for such help in such desperation.

There is no appropriate help for those like us.

Perhaps for us not all mornings - but at least some mornings!

During this time - Brandon has had the miracle of being 30 days seizure-free.

We haven't been 30 days seizure-free in gosh - at least the last four years!

I have to laugh the laugh of a lunatic relishing in insanity - in asking the heavens why....

Why couldn't we have had these last thirty seizure-free days with a "typical" Brandon free from the flu, bronchitis, PANDAS, so that he could have gained back precious pounds that seizures have stolen?

But alas we have learned just how futile those questions are.

In the words of Max Lucado, I must stay away from those "briars and brambles" that threaten to snare me and instead simply "reach out for the pierced hand that is extended to me from the fog."

I don't know that in the storm that is our vaccine injured "Life with Autism, Seizures, & a side of PANDAS" that we will ever not need our umbrella, but I am ever so Thankful, Grateful, & Blessed for those times the sun shines under it.

- notes of encouragement from fellow warriors

- an unexpected grant for a month's worth of medical marijuana

- a card in the mail from a care group at church

A Miracle in the Midst of our Mayhem

HOPEISM in our journey through hell.

On the Edge of Crazy yet not too far from Sane,