The Gospel according to Wakefield... 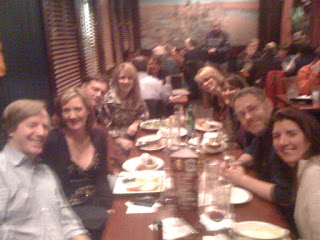 Webster's defines "gospel" with the following words:  good news, the teachings of Jesus, anything proclaimed or accepted as truth....

I chose this title because to me it mixes both sets of emotions I have right now about Wakefield and my beliefs as a Christian.

And to be clear, - no, I don't view Wakefield as "God" or "the Messiah" or anything idolatrous like that.  What I do have for Wakefield, is the utmost respect and admiration for who he is, what he stands for, and what he won't back down from -- which is quite simply, the truth.

According to what the scientific process should be about, but isn't anymore.

Not since Proffit, er Offit, no, I mean the "profit" that has occurred since the onslaught of vaccinating from everything from getting the flu to most likely not long from now, not having  freckles.

Not since what the government and the vaccine industry saw in how much they could gain from the profit off of attempting to prevent sickness in children, or from the treatment of the sick children those very vaccinations create.

Even though Wakefield happened to be the one that started us on our path of saving our son, he is not our Savior.

Wakefield is simply an endangered species of man who dares to tell the truth at no profit and at all cost.

He is simply a man who last Friday night at dinner with a group of people, challenged me in a way I've not been challenged in a long time; and it's had me thinking since then.

At dinner with he and the authors of "The Age of Autism" and some parent warrior-mom's of autism --- one of the authors said matter-of-factly to Dr. Wakefiled, "You know they won't stop until you are in jail".

To which Dr. Wakefield calmly replied without a blink or hesitation, "I know.".

I sat there across from Wakefield in stunned silence.

You see, "The Gospel according to Wakefield" is so solidly based on the truth and pure intentions, the thought of being persecuted all the way to jail does not even deter him.

I cringed at my own Christianity at that moment.

What am I being persecuted for believing?
What career am I giving up for the pursuit of truth?
How far will I be willing to go for Christ?

The next day at the event he was brought in to speak at along with Mark Blaxill and Dan Olmsted, I watched a man who has been carrying the cross he has been crucified on time and time again for years now, still stand strong with dignity.  I listened to a man undeterred.  Unphased by the media man-hunt of the previous week. Not angry, not accusatory, not out-of-control, -- but steadfast in the only way one can be when they know what they are doing and why they are doing it, and doing it not because they particularly enjoy it, but because it must be done.

I was watching a modern-day Paul.

A man from "The Gospel" who was just as persecuted.

A man who was Beaten. Belittled. Jailed.

Yet from jail, still encouraging the church to remain faithful.

From jail, still proclaiming the truth.

If there is anything 'god-like' about Wakefield, it is that similarity.

That truth cannot, and will not, be silenced.

Not even by death.

That similarity so lost in modern-day journalistic bias and mainstream medicine's apathy, that it seems as foreign as a story from Biblical times.

Making Wakefield seem like a god because average men who do what he does, are so rare that anyone who does do what each of us are called to do in speaking the truth, must be gods with delusional cult-like followers!

I have no doubt Wakefield would go to jail for a cause that doesn't even affect his own family.

Do you get that reporters? Critics? Mainstream Medicine?

You who are swayed by the lure of  pharma & advertising money today, just as Judas was then?

You who are nothing but marionette's controlled by the strings of the paycheck you would dare not lose as Wakefield willingly did?

You who will eventually hang yourselves on your own wrongness as Judas did?

One doesn't need research, facts, more research, and more facts, to understand the basic premise of who is believable and who is wildly trying to defend a very lucrative way of life.

Healthy children simply do not make anyone any money. Period.

There is too much at stake for a rational debate on the issue of vaccine manufacturing or drug safety.

There is too much money to be lost by a multi-billion dollar industry in Wakefield being right.

Jesus understood that conflict about those who convicted & crucified him.

He understood that for most people, their very pride would not ever allow them to believe in a Messiah, or that he was that Messiah. And he understood that even if they did believe that, their love of self would not let them follow that belief.

Yet he endured the cross anyway, for them.

Just as Wakefield endures the cross he bears,  for us.

When I had given up hope in ever finding answers for my son's chronic diarrhea, Dr. Wakefield's research led me to Austin and Thoughtful House Center for Children in 2006.  There, Dr. Krigsman's Endoscopy & Colonoscopy of my son, led to the medical treatment my son had been denied from the most respected medical center for children I live 20 minutes from in Houston.  Treatment which made my son a healthier person, no longer in pain, no longer homebound from the up to twelve bouts of diarrhea he had daily for over a decade.

From that period of time in getting that help for our son, I had come across a poem written by a profoundly disabled boy, who through a painstaking process, could share his poetry. That boy's name is Marshall Ball, and this poem is one I've kept in my Bible ever since then, as a symbol of my son's autism, bowel disease, and what Wakefield's research, and Dr. Krigman's subsequent treatment meant to us:


If there's anything in this life Dr. Andrew Wakefield is guilty of, it is that.