A weekend to glow... 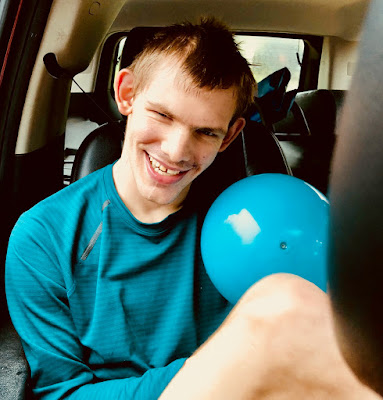 I've been thinking about the "A Night to Shine" event a lot lately.

The Tim Tebow  Foundation provides for an unforgettable prom night experience for thousands of individuals who have disabilities - and their volunteer escorts for the night who are the gracious and loving hands and feet of Jesus in making them feel like true Kings or Queens for a night.

I have seen many who I know participate in this and I've seen the pictures of pure joy on their faces in how much it meant to them, but at the same time, I found myself once again letting out the deep sigh of longing for something similar for those of us who have children of any age who cannot participate in the fun party-like atmosphere events.

Not because they don't want to do things others do - it's just that for a large population like my son,  their "shine" needs to be more of a "glow" suited to their unique sensitivities...

Our "Life with Autism, Seizures, and a side of PANDAS" is something that significantly affects our son.  He is non-verbal, an escape artist, and cannot handle large crowds, loud music, and overwhelming simultaneous sensory stimulation.  Events like "A Night to Shine" would be more "A Nightmare on Elm Street" for him.  He would be overstimulated, stressed, and a ticking time bomb of total meltdown waiting to happen.

For my son to shine, the atmosphere needs to be more of a glow...

Yet all these years later, all these "Autism Awareness Months" later, - society still doesn't understand that.

How for those who can participate and enjoy and look forward to "A Night to Shine" - there are dozens of opportunities for them out there - programs they can participate in.

But for those like my son whose needs are so different, there is nothing.  Few to no programs, -  so they, and their parents, are left in their eternal isolation.

Those like my son need "A Weekend to Glow" while their parents/caregivers get a much needed "Weekend to Remember" where both win.  Where my son gets an opportunity to be away from us.  A low key opportunity for him to glow in the peace and serenity of things he likes.  Simply having a buddy who has fresh wind and fresh fire to chase him, tickle him, take walks with him, or simply sit on the couch and rub his hair as he so likes.  The opportunity to be on the stage feeling the vibration of the music that is playing. The opportunity to be around others in his own low key way.

Where their parents get to have time to enjoy what others take for granted - a weekend of spontaneous.

I am blessed, thankful, grateful, and any such word that describes the absolute gift it was that someone "got it" with regard to the population of those who have disabilities as my son has.  Those significantly affected by autism who cannot handle events like "A Night to Shine" but who still need the ability to "glow" for once.  To get out of the confines of the four walls of their fortress from the world at home.  To be the center of someone's attention in their own way - whether that means simply someone to play video games with them, listen to music with them, line up trains and cars with them, or simply take care of them and keep them safe.

Camp Blessing, TX "got it" this past weekend with their pilot respite weekend.  And for once, I was able to let out a sigh of thankfulness and not one of longing.

No longer was I jealous of what the "A Night to Shine" had meant for others, because for once something was just right for us in a weekend for our son to simply glow and for us to relish in and remember.  So many have asked what we did, where we went, and there too - is a lack of awareness.  We didn't want or need to do anything special -- it is special just to have a weekend sans autism.  Just to be able to complete a task without a hundred interruptions.  To be able to get up and go somewhere and do something without the constant hum of autism tagging along.  We don't need a vacation from our life, we need a vacation from autism in our life - and this past weekend we had that it was absolutely priceless.

And from the look on Brandon's face on the way home from Camp Blessing, TX, I think it was pretty priceless for him too.

Thank you, to all of you at Camp Blessing, TX who made that happen.

We will never forget how that one weekend to glow opportunity has allowed all of us to shine.
Posted by Michelle M Guppy No comments: