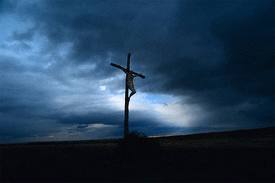 I'm strangely drawn to listening to the Carrie Underwood song, "Blown Away."

I guess because this has been a season where there have been many things I've wanted blown away.  Autism, seizures, gastrointestinal disorders, unexplained health regression....

On top of that, when the dry lightening of disappointment cracked across our sky not once, but twice in a row (lightening isn't supposed to strike the same place twice) it was enough to send storm clouds gathering in my eyes for sure.  I found my staunch faith slowing simmering into snarky fuming at the God who would allow such unfairness.  Life with Autism was enough to deal with in causing my Angel-of-a-son's health to be buried in the ground so to speak. I didn't need the added burden of life itself  being a mean old mister.

Seemed a twister of unanswered prayer had come for a season and was attempting to blow my faith away.

I think we're dishonest when as Christians we portray that those things don't happen to us.  That we don't have those un-Christian-like conversations with God.  Yes, we remain as positive as we can, but sometimes we can't hide the disappointment we feel inside.  It does my witness no good to portray that through this season I've had no doubts about God's ability to answer prayer.  His willingness to answer prayer I guess I should say.  Ok fine, his ability and willingness to answer prayer in the way I wanted it answered.  It does my witness no good to hide that I haven't at one time or another called God a "mean old mister".  I guess my only redemption is that I knew while saying it, that I really didn't mean it. And I've told God as much. We are to revere God as the Holiness he is, and not joke or take that lightly.  I have, and do, ask him for forgiveness when my flesh gets the best of my faith in doing that.

Which is why I'm thankful for songs that come out at just the right time to get me back on track.  Children with autism aren't the only ones drawn to music as an escape!  Some of my most heartfelt prayers and God-moments have come from listening to Christian music, and even non-Christian music that has touched me in a moving way, such as the country song Blown Away has.  It's caused me to put back into perspective things that I've allowed to be blown way out of perspective.

It is satan who would cause those storm clouds in my eyes.  Who took all those little things in my  life that happened lately and twisted them into a very powerful tornado that blew away all rational reasoning.  Reminding me of each prayer that wasn't answered in the way I wanted it to be. Causing not one disappointing blow, but two.  Persuading me to see all those things through my eyes, not His.  In what I wanted, not what He had planned.  In what would best serve us, not Him.

The problem with allowing satan to permeate your thinking is that not only is he a powerful tornado who only gets more powerful with each bad thing you attribute to him, but he becomes even more powerful than that when you allow him to blow away all the good things you know to be true.  So much so that all you can then see is the bad, thinking there was never any good!

It is satan who would want me to shatter every window of hope until it's all blown away.
Every brick of love, every board of purpose, every slamming door of prayer blown away until there's not a shred of my faith left standing.  Until there's nothing left of yesterday's blessings.  Until all that I know of Christ (or life) that is pure and good and holy, is blown away.

This song was certainly that for me.

There are going to be many disappointments in life, many things we cannot fix or figure out. Life is at times a mean old mister that often doesn't make sense.

While there may not be enough rain in Oklahoma to wash the hardships out of our house, there is enough compassion through God's mercy to.

While there may not be enough wind in Oklahoma to rip the nails out of the disappointments or sins of the past, there is enough power in God's grace and forgiveness to.

No matter how many tear-soaked whiskey memories or hardships are passed out on the proverbial couch of your house, running away and locking yourself in a shelter praying for a twister to blow it down may do just that, but it will never blow the bad of life completely away.

There's only one twister big and powerful enough to do that.

It is satan who calls us to run to him for sweet revenge.

It is God who pursues us to take shelter in his sweet redemption.

The crucifixion of Christ on the cross reminds me of that.  That "twister" that caused darkness to come over the land that day where at the moment Christ was crucified on that cross, the curtain of the temple was torn in two from top to bottom causing the earth to shake and the rocks to split. That twister that wasn't a people's revenge against the carpenter who claimed to be Christ as they had hoped it would be; but rather the Master's sweet redemption of a people through the man who was, is, and always will be, -- the Messiah.

That twister was not only to blow away the sins of our yesterday, but to give us hope for the future.

Jeremiah 29:11
"For I know the plans I have for you," says the LORD. "They are plans for good and not for disaster, to give you a future and a hope."

I'm blown away by that.


I'm thankful for those sirens that go off in my life at just the right time to cause me to seek shelter in God's word.  And I hope that next time a Texas-sized twister of life's unfairness crosses my path for a season, I don't run and lock myself away from God, but rather stand even firmer, embracing whatever comes my way with the promises of God and not the lies of satan -- knowing that when I stand firm with God, satan's twisters (or life's) can never blow me away.

I guess the reason I'm so drawn to that song is because in my mind I sing it for what I've shared here and not for what the lyrics are actually about...

Only God can shatter every sin until they're all blown away.
Every doubt, every disappointment, every disillusionment blown away.
'Til only light's left standing
Not the darkness of yesterday
Every tear-soaked temporary defeat blown away...

Click here to watch video "Blown Away" by Carrie Underwood.

To Healing!
To Hopeism!
To being "Blown Away" by God's Grace, Mercy, & Love!