The Woman who Swings 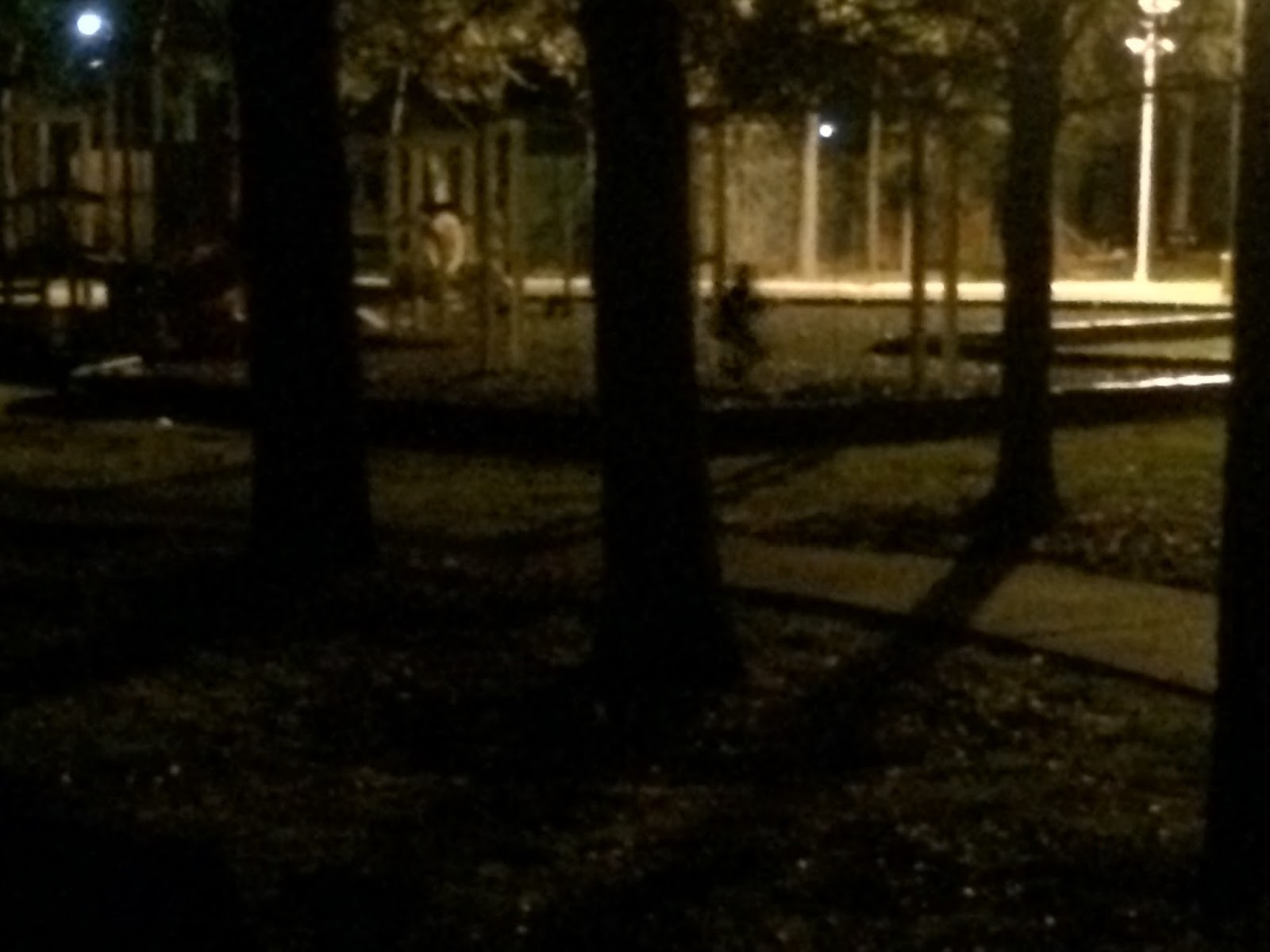 A long while back I started sharing on my Facebook page about "The Woman Who Swings."  My house backs up to a park. Behind my fence is a row of trees, and then off to the side is the park swing set.  I don't remember when her story first started, but for me, my story about her began a few years ago when our "Log Cabin" was built.  We had no shade in our back yard, and no porch, so we hardly spent any time outside.  When we had finally saved enough money, we had a covered porch built so that Brandon could be outside during the day and have some shade when he got overheated, and at night we could have a place to sit and listen to the rain or just be outside.  We called it our "Log Cabin" so that when we would get a few moments of escape, it was like we were actually going somewhere, even if we were really just stuck at home.  Our "Life with Autism" isolates us so very much -- it has been such great joy to escape to our Log Cabin to sit by the fire, have a BBQ with friends, or just be able to be outside during a storm and listen to the rain.  My husband built a couch out there for Brandon to lay on when he was having seizures or just tired, so that he could be outside too and not just stuck in the house.

At night, for my own little escape after everyone would go to bed, and especially for those nights when autism doesn't sleep and instead stomps and hums, I would go to the "Log Cabin" and just sit and read by candlelight or lay on the couch during the holidays and watch the lights on the Christmas Tree I have out there.  Sometimes on a clear night or during a full moon, I would lay on the trampoline and look at the stars while talking to God. The sound of the breeze blowing through the row of trees by the fence is so mesmerizing.  The shadows of branches dancing with the breeze incredibly soothing. Those times outside were always such peaceful times during such turmoil.  My son who has autism has been in such a long downward spiral with regard to seizure frequency and health in general.  It's been a time of disappointment and discouragement.  My time outside late at night true therapy...

I remember so very many times out there being somewhat angry with God.  Ok, very angry.  I had so many questions about why....why the constant downward spiral......what to do for my son.........where are you God...........   I remember crying so often out there because I felt God was so distant.  I have always joked that I need a text from God to spell things out to me.  I am not very good at discerning what his plan or purpose is.  If he would just spell it out I could accept it, whatever it was.  Is.  But to just "do" something. Give me a sign.  "Say" something to me.  I would beg God to not be as silent to me as my son was.   It was hard enough trying to read his mind, I was tired of trying to read "His" mind as well.

I'm not sure how long the woman who swings has been swinging out there, but it wasn't until our Log Cabin was built and I started spending evenings outside that I heard the first squeaking of the swing.  Every night, if we were outside, we would hear the familiar squeak of the swing.  We joked about oiling it, and eventually my husband did just that.  Every couple of weeks he would go to the park and oil the swing.  Her swing.  She became known only as "The Woman who Swings."   A silhouette sitting on the same swing, at nearly the same time each night unless it rained.  She parked her black car in the same parking spot.  We know this because we would often peek over the fence just to confirm.  Yep.  It's her.  Same woman, same time, same swing, same car, parked in the same spot.  She even swings the exact same cadence the entire time she swings.  On a really quiet night you can hear her faintly singing.  We've talked about her to family, then when they come visit, we go out there at night so they can see for themselves.  And she has indeed been confirmed by others!  You ask our neighbor about "The Woman who Swings" and he knows exactly what and who you are talking about.

The only thing we don't know, is who she is or why she swings late at night.  I love that mystery about her.  I have my own story about her....  I think she's a mom of young children who cares for them all day.  At night after husband comes home, dinner made, homework done, and kids in bed, she escapes for her own precious moments of childhood freedom.  I know she's not an autism mom because of the fact that she can get in her car and escape!

When I have shared about her, people have suggested I go and see who she is.  Tell her where I am when she's out there, and how we call her "The Woman who Swings" -- and most importantly, ask her why she swings.....   One night, I even made it halfway to the park, in my nightgown and robe, to do just that.  See who she was.   But I stopped, and turned back.  I don't want to know.  I want to know everything there is to know about Brandon, his autism, his seizures.... If it were God over there on the swing I would be there in a heartbeat asking him an infinite amount of questions....  But the woman who swings, --no.  I want that to remain mysterious.  She is one mystery I don't want to solve.  I love the mystique of her.  She is like what autism took from my son -- imaginary, pretend, carefree, make believe, childhood....  All those things and more.

To me, she has been my Angel.

One particularly rough night when I was desperate to hear from God, I heard the familiar squeaking. It was time to oil the swing but no one had.  So while I was laying on the trampoline trying to hear from God, all I could hear was her swing.  I think it was then that I felt she was more than just "The Woman who Swings" -- she was God's answer to my desperate need to hear from him.  I know God is there, I have HOPEISM in knowing that he is always there, but I needed to hear from God.  The squeaking of that swing was that answer.  Every time I was outside needing God most, she was over the fence swinging.   Sometimes when I couldn't hear the swing, I would look over the fence to see if she was there.  And she was.  Nearly every time I was out there, for as long as I was out there, so was she.  It was so uncanny that at times I even wondered if indeed I had made her up, so I would get my camera and take a picture of her in the dead of night.  If I was out there at 8pm, so was she.  If I was out there at 10pm, so was she.  One night I was out there from 11pm until 2am.  That entire time, she was there swinging.  Same woman, same swing, same car, parked in same spot.  Swinging with the same cadence the entire time.  Never slowing down, never speeding up.  How in the world was it that every time I was out there needing to see or hear from God -- she was over there swinging?  When I couldn't hear the squeaking of the swing, I would look over the fence and see her shadowy silhouette.

She'll never know what her presence there has done for my HOPEISM.  No, I still don't have the answers to all the questions I would ask God late at night.  I still don't feel I have heard from him in terms of if I'm on the right track, if I'm doing what he wants, what I need to do for my Brandon, if it all will work out....   But I don't feel so distant from him anymore.  The Woman who Swings is I guess like my own "Footprints in the Sand" real life poem.  Whether I'm out there to reflect on thankfulness or blessings of a good day, or trying to wash away a bad one and need to see or hear from God -- she is there.   My own personal Angel.  Whenever I'm laying on the trampoline, sitting at the table reading, or laying cuddled on the couch --- and hear that familiar squeaking or peek over to see the familiar shadowy silhouette, I smile.  I smile because I'm reminded that God is, and always has been, there listening.

And always will be.

Whether I see or hear him --or not.

No matter how long it's been that I've been outside for whatever reason, often before I go to bed, I will look out the upstairs window that has a view of the swings.  And I smile.  There she is....

The Woman who Swings.

The Angel who listens as I talk to God.